Home » Culture » Sushi the Most Popular Styles of Foods in California

Sushi the Most Popular Styles of Foods in California 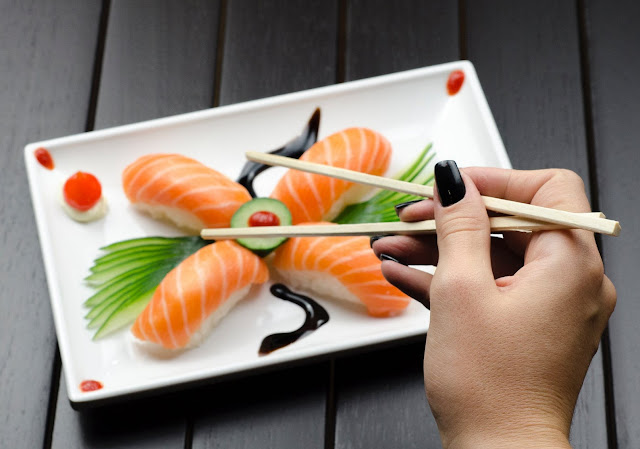 I had noticed that there are no female sushi chefs at any of the establishments I had visited. After closing for about a month, one of my favorite places, Fukyo Sushi – yes, I see the resemblance too – re-opened with a bit of a new look and a brand new chef, Kelly.

I have been eating sushi at Fukyo from the hands of Maza, the head chef and owner of the place, and it is perfect every time; so perfect I never need a menu, I just tell him to make me his recommendations for the day. Maza, now a 49 year-old father of two boys with a little girl on the way, has been in the business for 28 years. Addicted to motorcycles, Maza has broken through the myths and other old fashion styles while maintaining a basic sushi philosophy; fresh and simple. I talked to Maza, as I usually do over dinner, and asked about the myth that women are not suitable to cook sushi.

According to the myth women have more heat in our bodies and this makes the sushi warm and spoils it a little before it gets to the table. Another part of the myth is that the sticky rice used in sushi making needs to be at room temperature and because of the extra heat in a woman’s body, that is nearly impossible.

Maza’s response was very profound, “That’s B.S!” he said, “That myth is over 200 years old, and some still think it to be true!” He explained that in the old times, the appretince took a lot of heat from the senior instructor, making it harder for women, and for this reason the apprentices were, and still are, predominantly men. “Women can be just as good,” said Maza.

Kelly, a 24 year-old Caucasian female, was personally trained by Maza for a few months, and she does a fantastic job, I have started asking her for her recommendations for the day as well; and I am a picky person. Kelly got the opportunity to work with Maza after a friend told her he was looking for a second chef. “I was a bit scared because the other guy quit after one hour.” Maza explained that “the other guy” was a sushi chef with eight years of experience, “he just couldn’t handle it,” said Maza. But, what does it take to be a sushi chef? “ I see potential, not gender,” said Maza, “I didn’t think Kelly was going to last, not because she was a woman, but because it is not an easy job.”

Maza went on to explain that personality and attitude are very important. “You need to observe personality patterns, some patterns don’t work on this business.” Although Maza agrees that this things are hard to see at first, they do come out within very little time. “It takes a lot of patience,” said Kelly, “you also need to learn how to make everything, both the traditional stuff and the new stuff that are special for the restaurant.”

Although Kelly enjoys concerts and hanging out with friends, she says she is now in love with the sushi making process, “is almost like art,” she laughed. Maza said he was glad to finally, after six months, had found his co-chef, a woman defying the old myths and making a name for herself in the male-dominated sushi world.